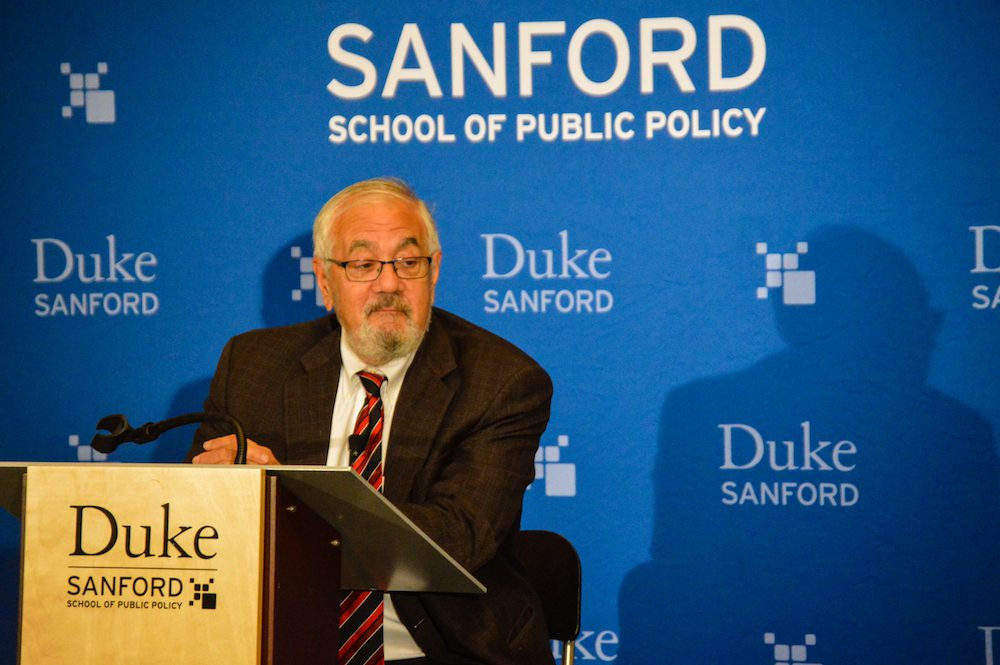 Barney Frank spent 32 years in Congress and served most recently as the ranking member of the House Financial Services Committee.

One of his most important achievements was sponsoring the 2010 Dodd-Frank Act, which resulted in a sweeping reform of the United States financial industry and led to improved financial stability and consumer protection.

He is also one of the most prominent gay politicians in the U.S. Barney married his husband Jim a year before retiring from Congress.

In this conversation with Sanford’s dean Kelly Brownell, Barney Frank questions which side Donald Trump is rooting for in 2018, talks about the use of humor in politics, and explores the need for pragmatism in the fight for a fairer society.

On Donald Trump. (Frank wrote a recent op-ed “I Am starting to wonder which side Trump is rooting for in 2018.”)

He’s an extraordinary figure. He is clearly not interested in governing. I don’t think he would be capable of governing if he was interested, but it does strike me – when he complains when things aren’t accomplished – he is not someone who spends his time trying to move public policy. He makes statements, he he blames other people. And I was particularly struck … by the extent to which he has been relentless in his criticism of his own party’s control of Congress….

You have the Republican president telling people how terrible the Republican Congress is. [He’s] specifically denouncing the Republicans, generally denigrating the Congress. And it is very unusual, I can tell you the Democrats are heartened by that.

...I think in Trump’s mind he’s been disappointed by not getting more done. He would be just as happy running for re-election in 2020 as the victim of a Democratic House, maybe even happier than being held accountable for the failure of a Republican House.

On polarization in politics

I would encourage Republicans who do not believe in this hard-edged, angry, negative approach to vote in their primaries. … The Republican Party lurched sharply to the right and the Democrats have been responding to that.

But … to get back to where we were under George W. Bush when there was a different deal but cooperation, the non-Tea-Party Republicans, the non-angry, divisive Republicans have to take back their party.

On use of humor in politics

To be honest, the first reason I use humor is because I enjoy it. I mean, have a very low boredom threshold. I think of things that seem to really be funny because I like that.

But beyond that it’s a very effective tool in debate. If you say something very funny it is likelier to be remembered. That’s especially the case if you can make a polemical point in a humorous way – both because it is more likely to be remembered and because nobody likes to be laughed at.

… And frankly also the fact that I’m lucky enough to be able to think of fairly funny things on the spur of the moment made me more effective in debate.

On coming out as gay

When I first decided I was interested in politics I was 13 years old and I accepted the fact that everybody hated gay people. I knew I was gay. We didn’t call it gay then, this was 1953. But to be in politics you had to be popular, [and] to be gay was to be unpopular.

So, for years I thought, “Well how am I going to work this out?”

As time went on … being gay became less and less unpopular, [and] being in government became more and more unpopular. By the time I left office, I mean this quite seriously, being gay was more socially acceptable than being a Congressman.

My marriage to Jim, the only marriage still that a member of Congress had to come out of the same sex, was more popular than anything I did as a legislator (including the financial reform bill.)

But by the 80s I decided [living in the closet] wasn’t going to work. When I first ran for office my compromise to myself was, “Well I want to get elected to office.” There were things I wanted to do. I would enjoy it. There was a vision of society I wanted to fight for.

[But I knew that] if I’m honest about my sexuality I can’t win. So, I won’t tell people that I’m gay. I won’t lie about it, say I’m straight (or I once did to my regret.) But on the other hand, I’m never going to back away from being an advocate. I’m not going to be a hypocrite. I think you have a right to privacy but to hypocrisy. And I thought, “OK I’ll be publicly closeted, privately active.” Didn’t work.

The disparity between a very satisfactory public life and a miserable, deprived, unhappy private life was bothering me. And finally [I said] “I’ve got to end this.”

So, by 1987, my seventh year in Congress, I said, “You know what? I think I’m going to be OK, I think I’ll get re-elected.” … The deprivation of my private life, the unhappiness that I felt was such that even if it cost me my job, [I decided it’s] not worth [my] life.

Tip O’Neill was a wonderful, progressive, great force in America who was personally very supportive of gay rights. But when I told a friend of his [that I was coming out of the closet], the political journalist Mike Barnacle … [Tip O’Neill] in his Boston accent he said, “Michael, old pal. I’m afraid our friend Barney Frank is all through in politics.” And [Mike Barnicle] said, “Why?” And [Tip O’Neill] said, “Well, I hear he’s going to come out of the room.”

Tip always got the music right, he didn’t always get the words right.

And a lot of my straight friends, liberal friends, the liberals in Congress who were great advocates for gay rights (which we were then debating still) said to me, “Please don’t do that. You’re an effective ally, we don’t want you marginalized.” So there was the perception I might lose.

I knew that wasn’t going to happen, but there was still the sense … once you’re seen as gay that will just overwhelm other aspects of your persona. You will be a weaker advocate elsewhere.

And I couldn’t deny that. I just had to say to them, “Hey look, if that’s the price, I’ll pay it because I can’t live this way.”

And then it turned out that was wrong – that the public was more ready for it.

And I will tell you I decided at the time after doing some polling (and we polled after I came out before the election of that year), and [the poll] said 44% of the people [who] answered the question, they thought I’d be hurt [by disclosing my homosexuality]  …. But only 22 percent were themselves personally upset.

And it struck me that the average American was less homophobic than he thought he was supposed to be.

On his talk at Duke: The Fight for a Fairer Society is Pragmatism a Betrayal. Is pragmatism a betrayal?

No. Quite the opposite. The absence of pragmatism, that is a betrayal — not in the sense that it portrays bad motives but it renders your advocacy of your ideals impotent.

No unrealized ideal ever fed a hungry child or avoided a war or prevented a river from being polluted or did [anything] else useful.

…On the left, what I fear is this polarization where Democrats who are trying to take reality into account and do the best they can given political constraints will be attacked by people who think that they are compromising …. What I fear is that you’ll have people say, “Oh if you’re not for a single-payer system right away then we’re not going to be supporting you.” And that’s – that’s damaging. But it also means you don’t get anything done…. there is a growing view that people who will in fact embrace [pragmatism] are disloyal, that it’s a betrayal, and I find that threatening to any chance of social change.

They’re the ones who put Gorsuch on the Supreme Court. They’re the ones who got us to withdraw from the Paris Peace Accord. This notion that you have this level of perfection and if you don’t get it you’re not going to be supportive. It’s just outrageous.

I don’t understand how anybody can look now at what Donald Trump is doing and justify having either voted for him in some extreme cases, or not voted against him… I want them to understand what damage they have inflicted on people.

When Jeff Sessions reverses what he says he will do with regard to law enforcement, and he’s going to drop any effort to try to improve the way in which police officers deal with African-Americans …  that’s [young Democratic voters] fault, that’s their conscious choice.

And it’s not a surprise – it’s not as if they couldn’t see that coming. So, I am very angry at those people whose stiff-necked, unrealistic need to feel totally morally superior to everybody else including reality gave us Donald Trump.

On what he is proudest of in his career

Well [that’s] something emotional to talk about…. I worked very hard for 33 years to build rental housing for low-income people. I mean I think that’s one of the great causes that liberals ignore.

I feel good about how we’ve been able to play a part in the advancement of equal treatment for LGBT people. And yeah, the financial reform bill – I thought was an appropriate way to do it. But I also hope I’ve shown people … I have had a pretty good record on racial issues. I think I’ve been as much of an advocate for LGBTQ equality as anybody else. And I think I’ve been able to show that you can do that; that being concerned about effectiveness doesn’t mean that you lose your moral compass.