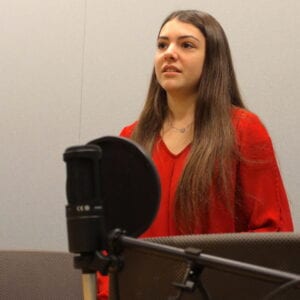 Sari Kaufman is a junior at Marjory Stoneman Douglas High School in Parkland Florida. Her high school was the site of a horrific mass shooting on Valentines Day. Seventeen students and staff were killed and many others were injured. Since the shooting, Kaufman has worked alongside her friends to register thousands of voters.

She says she has learned a lot about leadership in the last few months.

“The most important leadership lesson is to be a leader, but not to always say that your position is a leader,” she says, adding that, especially with young people, it’s important to find common ground and find out what people really care about. She says often leaders only think about themselves, but she’s learned that true leadership is different, “it’s about what the people can do.”

The day of the shooting

So February 14th, it was Valentine’s Day, and just like any other day, my mom dropped me off before school and I said, “Pick me up at this time,” not thinking anything would happen.  I have a Spanish test that day, so I’m starting with my friends a little nervous and then in second period a fire drill goes off and we were all a little aware just because we normally don’t have it that early in the morning, but we just went back to class. And then I take my Spanish test in third period, go to lunch, talking with my friends. We had a test the next day, so we’re all worried about that.

And then I go to fourth period and I’m in my debate class, it’s more of a relaxed class. The fire alarm goes off again, and we are now a little uneasy just because why would we have to fire drills in a row? But again, we just went outside where you stood in the zone that we had to be in. And then, all of a sudden, we hear five noises and we think it’s gunshots, but it’s Parkland and we always joke that nothing happens in Parkland because a quiet, safe town. We never have high crime. So we all look at each other like, “Okay, that must not be what we think it is. It’s going to be fine.”

And then all of a sudden we see a police car driving on our baseball field going extremely fast and with their sirens on and it seems like all at the same moment we get text messages from our friends who are in the building where the shooting was occurring and saying, “My friend just got shot,” and seeing videos on Snapchat of our friends getting shot at. And that’s when we realized … It was very surreal, but that’s when we realized we’re in a shooting and I just went into survival mode. We just have to get out of the area and run as fast as we can.

Administrators started running towards us, and police in SWAT gear starting to run towards us, and they just kept screaming, “Run, run, run.” So the middle school is right next to our high school. So we ran behind the middle school and to a local store, just we went to Walmart. And we got to Walmart and we thought we were going to be okay because it should be over by then and then all of a sudden the police say, “We don’t know where the shooter is, keep running.” And it’s just after going through running behind the middle school, trying to escape what happened and then thinking you’re safe and then realizing you’re not safe. It’s just extremely difficult, especially when you’re also getting texts making sure that your friends are okay.

So we keep running and we go to a local store, local restaurant, and we turn on the TV and it all still felt like I was in a dream. But once I looked at the TV and CNN and Fox, all of the major news outlets were saying first it was five dead at Marjory Stoneman Douglas High School and then 10 dead. And it was obviously heartbreaking. And then when it’s 17 dead, it’s just, it’s uncomprehendible. And I was continuing to get texts from my family and friends, even numbers I didn’t even know saying, “Are you okay?”

And I saw the community come together that day, just strangers helping strangers, like the coolest kids helping kids who they would never touch or would never want to talk to. And it was just extremely … It’s hard to put in words how I felt that day just because after going to the same place where you learn and then that turning into a crime scene and people who are … One of my friends, they were taking a test, and actually they were writing an essay, and then I say turned into someone being dead at their own desk. It’s just unimaginable.

On becoming an activist

After the shooting, I needed to cope in a certain way. So I started writing about my experience. And since I had to debate that topic of universal background checks for guns in December, I had a sense of responsibility kind of to share my knowledge that I had gained, to share with other people. So I incorporated that when I was writing my experience, and a lot of news outlets then made into editorial and it got shared in so many places. And right after that, it all seems like it was just a couple weeks that this movement really started.

We went to Tallahassee to lobby legislators. And again, it was just a very natural process. It was, “Okay, this happened. What can we do? This is what we can do.”

On responsibility to advocate for classmates who died

Alyssa Alhadeff, she was in my math class, and she passed away. And coming into the class when we came back to school and seeing her desk empty, it just pushes you and you come home to, “Okay, what can we do? What can we do so another student doesn’t have to walk into their class and see it desk empty because of a shooting?”

Why focus on voter registration?

When we went to Tallahassee it was very frustrating but very insightful. We found that legislators weren’t listening to us. And we found that a lot of them said, “I completely hear you, but I can’t do anything because either my party doesn’t want to vote that way.”

And I think that’s when we changed form from focusing on legislators to focusing on the everyday people and seeing that a vote to take away, say one of those legislators and “hire” a new one, that can be the change.

A lot of people in Parkland say in the midterms, let’s pretend that it’s like a real job. Let’s fire them and hire new people. If the same person’s doing the same thing and continuing to have a bad record, then at a normal job they would fire them. So let’s have the people, everyday people, be their bosses and go on midterms and fire them.

On getting young people to vote

I think that that’s definitely been the most difficult thing is to get someone who isn’t engaged at all to engage. But I think asking them why? Like there has to be something that occurred in their life to feel that way … and going through the process with saying, “I understand where you’re coming from” and kind of put yourself at the same level as them and then bring them through the process of, “Well, this is how I changed my mind to see that I can be engaged, and if I am engaged, then I can create that change that I want to see.”

If she could pick one leadership lesson what would it be?

I think the most important leadership lesson is to be a leader, but not to always say that your position is a leader, because if you’re able to have that common ground with other people and put yourself at the same level and position as everyone and be able to be real with people, you are able to see what matters to everybody, no matter their level — especially like socioeconomic level or even like at school, it’s like their popularity level — and then to really see what’s important to them.

A lot of times I think a lot of leaders kind of close out and only think what they can do, but I’ve learned, especially in our democracy that it’s about what the people can do.

Sari Kaufman was on Duke’s campus to participate in a panel discussion about the challenges to student voting rights. The event was part of a special series run by the Hart Leadership Program called Connect2Politics. The series is exposing students to a new generation of young political leaders.