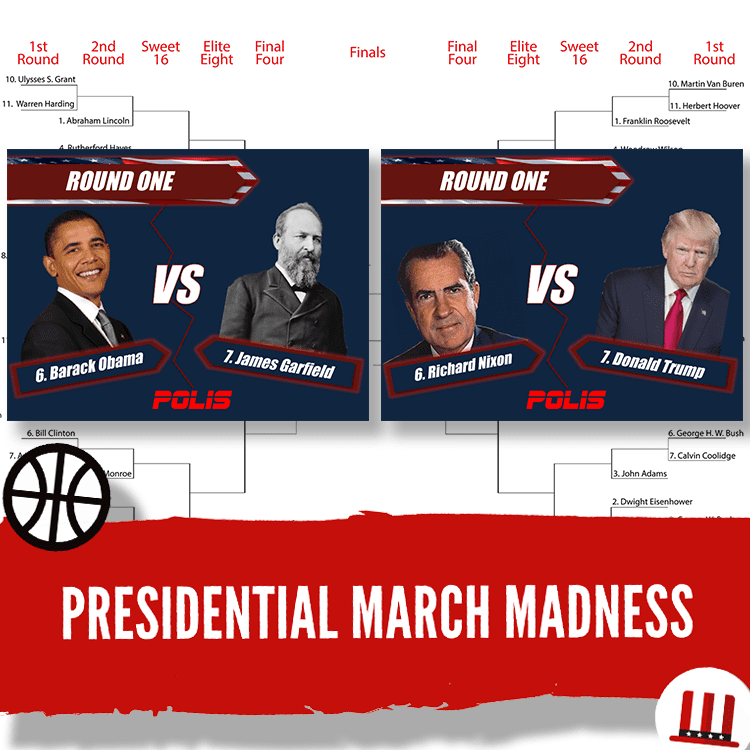 It’s March Madness, but instead of basketball, we’re pitting U.S. presidents from throughout the ages against each other. Who will be crowned the best president?  Will it be Washington or Honest Abe?  Maybe FDR?  Or perhaps a dark horse will emerge. What criteria should we be using to determine what makes a great president? Honesty? Morality? How heavily do we weight racism and sexism?

What is March Madness for presidents?

Mayer: It’s about getting students- kind of a creative way to get students to think about the present, think about what kind of a president we should have, what does it really take to be a leader?

I think the basic idea was, “let’s a creative way to get people thinking about the history of presidents and all of the different dimensions that might go into making a good leader as a way of kind of holding up a mirror to the present day.

Presidents are ranked and bracketed. How do you keep score?

Mayer: It’s not immediately obvious, unlike a basketball game, and so what criteria should we really be using to think about what makes a great president? Is it honesty? Is that an important characteristic? We’ve had some more and less honest presidents over time. Is personal morality important or not? Is decisiveness, etc.? So, there’s a set- there all kinds of things that we can think about that might go into making a great president.

Rudell: I think what’s always fascinated me about the president since I was twelve years old is that it changes over time. So, what made a great president the first twelve to twenty years of our nation’s history is far different than it is today. I like answering questions that might change a generation from now, and I think that’s part of the fun of doing this.

How do you compare George Washington versus a modern-day president?

Rudell: Well we’re all human, and so we start with the things that make us human. … honesty, decisiveness … how heavily do we do we weigh racism and sexism? How heavily do we weigh being a jerk versus being a nice person? And maybe through that, we can start to challenge students and they might challenge each other on previously-conceived notions.

There might be a liberal in the [spring Break class] who decides that Ronald Reagan exemplified what it means to be president, regardless of ideology. And, similarly, someone on the right might decide that his predecessor, Jimmy Carter, was actually, you know, this noble figure who just- it didn’t happen to work out for him.

On the first-round pairing of Donald Trump vs. Richard Nixon

Rudell: I mean, we’re not being biased in saying that when these seedings were created about six months ago, no one knew for sure whether Trump would still be President. So, the thinking was, “We have Nixon, who did things that were very positive for the country and did things that were very destructive to the country.” And there were elements of Donald Trump in that, without oversimplifying it.

So, we wanted to ask students- essentially, we have stark good and stark bad, objectively in each of these individuals on personal and professional levels. How do we evaluate them? And that’s- I’m interested to hear, you know, what the students have to say on that.

Mayer: The two of them did not like each other, although Johnson was JFK’s Vice-President and obviously succeeded him. And it’s fascinating, because, in our historical memory, Kennedy is kind of a romanticized figure, perhaps because he was shot. But also, he was handsome, he was articulate- but I think, over time, LBJ’s legacy has actually grown in the sense that he actually, you know, did many of the things for which Kennedy is credited …

I mean, Johnson was really the architect of most of the civil rights legislation of the of the 60’s. So, that that’s a fascinating one.

What will students learn from this spring break class?

Mayer: We forget how young our students are sometimes, and, you know, their memories go back no further really than Barack Obama. And so, so to be able to be exposed to the long range of presidents, so many different styles, and to think in a fun way about the pros and cons of the factors that go into it, the things that might have been important in one moment in our history and maybe are less important now, I think is really the point of what we’re doing.

And I would hope, at the end of this, that the students would come out of it with a much clearer sense of their, you know, their own sense of what it takes to be a great president and what our times demand.