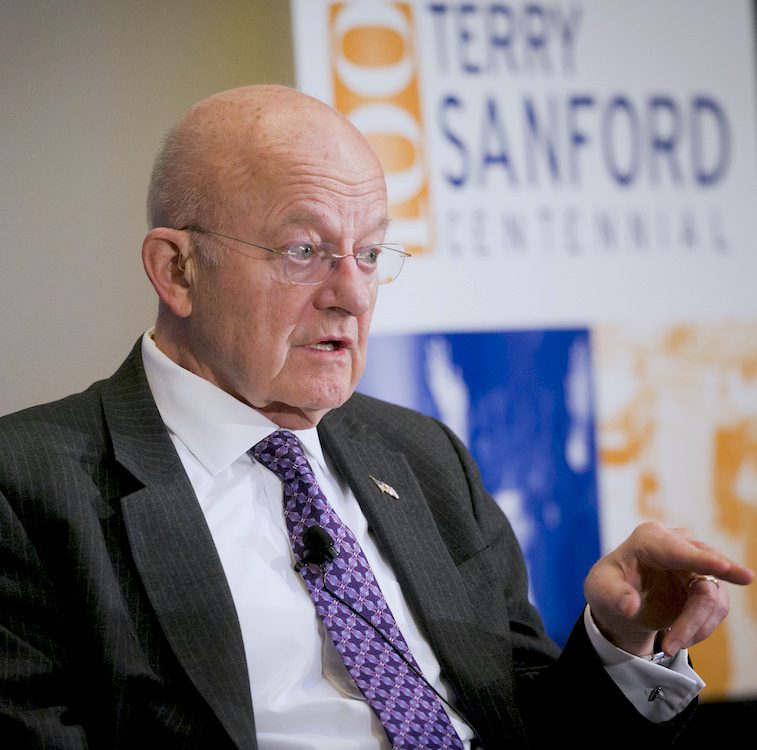 James Clapper served as director of national intelligence and Obama’s top security adviser from 2010-2017. He oversaw 200,000 intelligence employees, a $52 billion budget and top security organizations including the CIA, NSA and FBI. In this episode of Policy 360, he discusses threats to the U.S., his decision to speak out against the country’s current leadership and his hopes for future leaders.

James Clapper was at Duke to give the inaugural David M. Rubenstein Distinguished Lecture.

What is the biggest threat to our country right now?

I would say right now in the near term, I think the most profound threat the United States faces is Russia. …

It does pose an existential threat to the U.S. It’s sort of reinforced or highlighted by President Putin’s recent chest-beating speech, but I think even more serious is the soft war, if you will, the information warfare that the Russians are mounting against us, notably their interference in the 2016 election, but that continues.

And this to me is a very serious threat which requires not just a whole government approach, but a whole society approach. They are determined to undermine the basic fabric of our system and promote as much polarization as they possibly can. Right now, the United States is an easy target for them.

Can you give us an example of when you might have had to tell the president something he needed to know but might not have wanted to hear?

Not long after I took over as Director of National Intelligence I was in the Oval Office to brief [Obama] and it was on the topic of Russia and the indications we had that they might have been in the throes of developing a weapon system that … could be in violation of the New START Treaty, which at the time, early in the Obama administration, was a very high priority.

And so, I gave [Obama] this information, which he probably would have preferred not to have heard, and I also made the point that we could not keep [the information] from the Congress. We absolutely had to brief them right away.

Now, a couple of the president’s advisors were not happy about that, but the president, to his great credit, agreed that perhaps the intelligence community had an inelegant sense of timing, but nevertheless we needed to tell the Senate Foreign Relations Committee about this potentially-damaging information. We did, and to their credit they went  ahead and voted … anyway.

… To President Obama’s great credit … he expected the unvarnished truth, our best assessment of whatever the issue was and not to taint it or slant it or politicize it.

On his decision to speak out against Donald Trump

Well it really wasn’t something I agonized over for a couple weeks and said, “Well, I’ll go speak out.” More accurately, I think I sort of backed into it. The issues with President Trump started when he was President-elect, and when we- I say “we”, the Director of the FBI (then James Comey), Director of the CIA (then John Brennan), and the Director of National Security Agency (still Admiral Mike Rogers) and I- went to Trump Tower on the 6th of January to brief then President-elect Trump and his team on the Russian interference.

And we had completed what’s called an Intelligence Community Assessment, which was tasked by President Obama around the 5th of December, to put together all the reporting at whatever classification level, to put in one place, one document, the extent, magnitude, and depth of the Russian interference in the election.

And, early on, then President-elect Trump just couldn’t accept that.

I think the reason is- and I think that it continues today- that the Intelligence Community Assessment that we did had the effect of calling into question of the legitimacy of his election, and his singular indifference to the threat posed by Russia- which continues, particularly the information warfare threat apart – quite apart from their formidable nuclear arsenal- I think puts this country in peril.

And that is much more difficult when you’re in the government, in an administration, to speak up about it.

And so … that kind of continued, and my career progression in the eyes of Mr. Trump went from being a “Nazi” to- of course, he characterized us as “Nazis” for — blaming us for the revelation about the dossier, which was absurd.

I called him on the 10th of January after a news conference he had which he characterized intelligence community as “Nazis.” …I felt duty-bound to defend the men and women in the intelligence community who toil long and hard, and often in and hazardous conditions overseas, to keep this country safe and secure.

And I tried to impart to him what a national treasure that he was inheriting which stood ready to serve him and to do all it could to make him successful.

And then most recent is a “Liar and Leaker,” but I’m in good company with the likes of Senator Mark Warner, Congressman Adam Schiff, John Brennan, and Jim Comey, so I’m okay with that.

But, my main concern, apart from the personal shots, which don’t bother me (which is a sad commentary in and of itself) – is the assaults on the intelligence community, which I believe will continue to convey truth to power, even if the power doesn’t listen to the truth.

Does President Trump’s use of Twitter make it hard for people who are on the inside to keep quiet?

…I think it’s very hard for them to keep up with these utterances- if you want to call them that- these tweets, because they reflect [an] erratic thought process.

…. And they are policy. Like it or not, those are official written expressions of what the President believes, or what he thinks should happen … and I think it’s very difficult for people to, in the government, to just keep up with that- let alone speak up.

James Clapper is at Duke to give the inaugural David M. Rubenstein distinguished lecture.