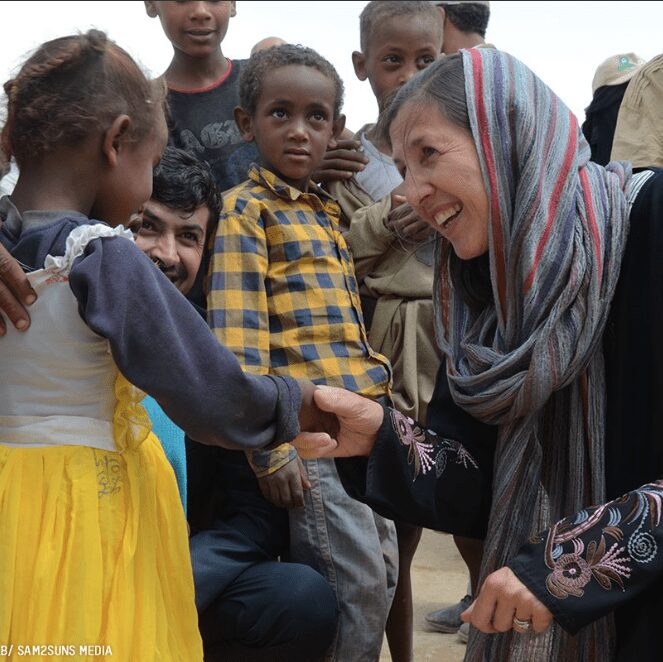 Yemen is in the midst of civil war, a brutal conflict that has caused the world’s worst humanitarian crisis according to the United Nations. By some estimates, 75 percent of the people there are in need of humanitarian assistance. Millions have been forced to flee, millions are at risk of starvation, and there is a real problem of cholera.

Abby Maxman, president of Oxfam America, recently returned from a trip to Yemen.

“What inspires me is the incredible resilience, and strength, and commitment of people living in conditions such as these,” Maxman said. “I feel a profound responsibility to bring the voice of those I met to those with power who can make change happen, and hold power holders to account, so that people can have hope and aspirations again.”

Why go to Yemen?

It is the world’s greatest humanitarian crisis, and it also, for us at our work as Oxfam, represents a place where there’s extensive human suffering, and there are policy issues and power holders who can really make a difference in ending the crisis, [particularly] the US government.

So for me, with all of the important and forgotten crises around the world, I wanted to showcase what’s happening there – bring attention to it, and do the policy advocacy influencing here in the United States, and at the United Nations, to bring an end to the war.

Can you describe the scene for us?

I was in the governorate of Khamar, north of Sana’a, which is the capital. I went to an internally displaced persons camp that had hundreds of people who had been displaced over the past three years. And also, some families who had arrived as recently as two weeks before, from the southern part of Hudaydah, which has been a place of significant intention, and a target of Saudi coalition airstrikes that are backed by the United States.

I spoke with a family who had sold the end of their assets, a family of five, a mother named Fatalah who was telling her story very cautiously, where they gave up everything to come to a place that they’re guaranteed a meal a day.

Safety and security are what drove her to flee. Now they’re living under a plastic sheet, able to realize some basic rights as displaced people, and going to partner organizations such as Doctors Without Borders to get some of their medical needs met.

But really above all, what was driving her, and [other] people fleeing was fear for their lives.

I’m a mother of three, and I can only imagine the kind of choices people are making. And the people I saw, who had a range of issues, had experienced untold suffering, were making choices to come to a dusty, fairly desolate place, and that felt like a choice for them.

Can you describe the population?

75 percent of the population are women and youth. Interestingly, sadly in this context, those are the voices who are not being heard in terms of prospects for peace.

This is a war being waged by men in power on both sides. The internationally-backed government supported by the Saudi-led coalition, whereby the United States is an arms broker to that side, and the Houthis, the rebel group, a parallel government, all men, making decisions and excluding women.

And there is an opportunity: UN Resolution 1325 [shows] when women are at the table, things can really change and happen.

I saw a country where women were systematically being excluded, when it would actually change and transform what’s happening.

I also met with amazing women and men who were doing hero’s work. Human rights activists … a woman lawyer, who was negotiating prisoner exchanges while her own children were living outside of the country. Two [of her children live] here in the United States, one serves in the US Navy, and both [are] US citizens.

She is affected by the Muslim ban and cannot come to the US to see [her] own children, while she’s doing heroic work in Yemen.

Did you see anything there in particular that surprised you?

There are a few things that struck me. One is the access to food.  … more than 8 million people are on the brink of starvation, living on one meal a day. 8 million people. That’s the entire population of Virginia.  … yet I saw markets stocked with food I know that the vast majority of the population can’t afford, and one third of the workforce made up of public servants who have not been paid consistently in over two years.

So, all of these juxtapositions and signs that it’s a country that’s on its knees, and the majority of the population are on the brink of famine and despair. That was deeply discouraging because again, there are forces that can bring the parties to the table and negotiate peace.

What do you see as the biggest need?

Peace.  Other than peace. Everything. Food, clean water. …  This is an ignored crisis, and the needs are outstripping everybody’s collective capacity.  … People living on one meal a day is not acceptable minimum standards.

Is there something in particular that you won’t forget?

I guess something else I really observed in the displaced persons camp, and I’ve visited many, many camps, many places in my life, is really a lack of aspiration and hope … It really felt like there was a feeling, a lack of belief, that change could really happen.

[Yet at the same time] what inspires me, is the incredible resilience, and strength, and commitment of people living in conditions such as these. It’s a bit of a duality –  I feel a profound responsibility to bring the voice of those I met to those with power who can make change happen, and hold power holders to account, so that people can have hope and aspirations again.

I was honored to spend time with #Oxfam staff & partners in Yemen last week. #Yemen is facing the world’s largest humanitarian crisis & it’s not getting nearly the attention it deserves. Please join me as I share what I witnessed on the ground & RT to help me spread the word. /1 pic.twitter.com/Wtkv1XIzrn