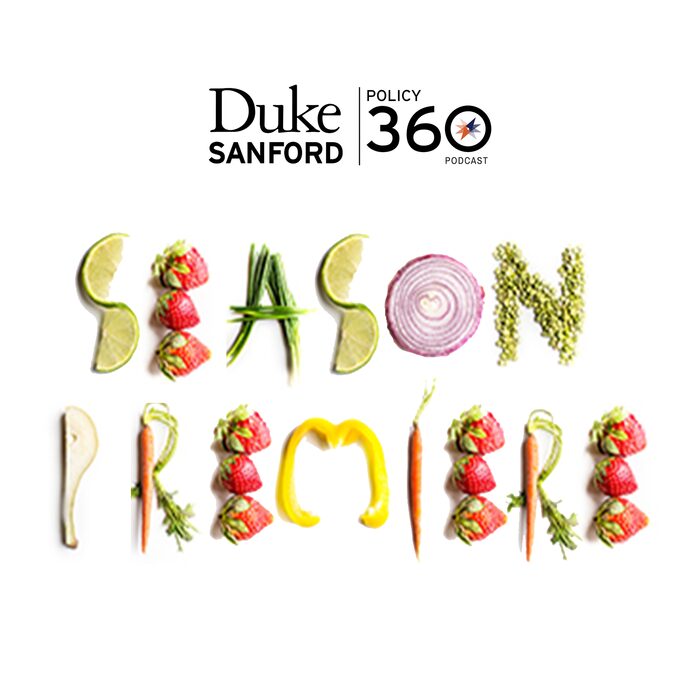 Kelly Brownell has stepped away from his role as dean of the Sanford School of Public Policy to launch a new World Food Policy Center at Duke. He talks with Sanford’s new dean, Judith Kelley, about key challenges that he hopes his new center will begin to address.

For example, he hopes to get people in the food and food policy space talking to each other. The academic field is segmented, he says. “There is a lot of depth around particular topics but not much breadth across them and very little communications across them.”

I’ve been at Duke for five years and before that, I was at Yale … and ran a food policy center there that mainly dealt with obesity prevention and public health and nutrition. We worked on school nutrition standards. We worked on the impact of food marketing on children. We worked with places like New York City on their regulation to get rid of trans fats in restaurant foods. Something that I’d work on for many years are soda taxes.

But I learned pretty quickly in this work that there were things happening in other areas of food policy like work on hunger and food insecurity, for example, that were related to what was going on in my orbit but I wasn’t familiar with the people or the institutions.

So, I set out to get to know them better and in so doing, I found out that those people weren’t familiar with our work and (like any field) the food policy field was segmented where there was a lot of depth around particular topics but not much breadth across them and very little communications across them. That led to very significant policy gaps and missed opportunities.

So, for example, you might have an agriculture policy that dumps excess commodities like butter into schools. Well, that’s great if you’re a dairy farmer, but it’s not so good if you’re concerned about the health of the children.

[In some places] fields combat one another – like the debate over whether SNAP recipients (the people who receive food benefits [that] used to be called food stamps) should be permitted to use their benefits to buy things like sugared beverages. [In this case] the obesity and hunger communities have squared off and there’s essentially an impasse, so nothing’s getting done. …

That’s a missed opportunity, if you could bridge these areas, to have a stronger, unified voice arguing for policy changes that would create wins across the areas.

What are the most pressing world-wide problems?

Oh, my gosh. Where do we begin? World population is increasing at an incredible rate. There are already problems with feeding the world. There’s now enough food being produced to feed everybody, but political and economic problems get in the way. That may not always be the case.

There could be a time when there’s just not enough food around. So, you have to have a lot of faith, for example, in genetic engineering of foods, agricultural technology to keep up with population growth. …  That’s just one problem.

Food insecurity and malnutrition have now been surpassed by obesity worldwide as significant problems. There are many places around the world … with a dual burden where food insecurity and obesity coexist. It happens in our community. It happens all around the U.S., but it happens in developing countries too; sometimes within the same family where a mother, for example, might deprive herself of food in order to feed her children. So, you might get overnutrition of the child, particularly with some nutrients and undernutrition of the mother.

These problems are all affecting one another and they’re very significant in the world scene. Countries like India and China are expecting massive increases in diabetes that follow behind this cascade of obesity and related disease that are occurring.

When you put it all together, there are a lot of reasons to be worried — not to mention the impact on the environment of modern agricultural practices. It’s hard to think that there’s any non-industrialized way of creating food to feed the many people that are on Earth, but a lot of that creates environmental damage.

There are many perplexing problems that are very important not only to human health, but to environmental health, but also things like political stability between countries. Say, for example, when a shared water resource like a river, an aquifer, or a lake starts to go low. So, you could just count the ways [to be concerned].

On the use of “strategic science”

… We interact with policymakers a lot in order to figure out what kind of science can be done to help support their work. We have one very interesting case study. When I was in Connecticut, we worked with a Connecticut attorney general … the food industry had launched [a program] called Smart Choices, where the food industry had essentially gotten together with itself, had created nutrition standards, and they said, “Well, any of our products that meet our self-defined standards could have this Smart Choice label on it.”

They had set such lax standards that things like Fruit Loops and cereals like that could have the label.

So, we worked with the Connecticut attorney general to see if this practice could be stopped and it was really exciting because essentially six weeks after he launched an official investigation into this program the industry pulled it. That was an exciting victory and the science helped support the research [and] it helped support the change, but the change was produced by a change agent, in this case, a state attorney general.

[But] yes, it gets frustrating. The behavior of the food industry gets very frustrating at times. The food industry has to do one thing, sell more food. Sell more food is not necessarily in the public’s interest. You get this fundamental conflict between corporate interests and public health and this gets played out in a lot of ways. …

The object of the World Food Policy Center is to bridge four fundamental areas of food policy, four clusters. One cluster is hunger, malnutrition, food insecurity. The second is obesity and related diseases. The third is agriculture, environment. And, the fourth is food safety and food defense. So, there are obviously global things that can be done on these and we are, but we also believe that doing something locally is very important.

We’re working with the community where we live, Durham, and a rural North Carolina county, Edgecombe County, to see if we can create model food systems communities.

The hope there is to try to take these two places and get everything right (to the extent humans can) by finding out what’s working that exists within the community already and scaling it up by convening people from around the world to learn about best practices, [and] to find places where you can intervene that create wins across these areas … and develop a set of best practices that potentially could be replicated other places around the country and the world around specific topics like early child development and nutrition or food-related innovation …

If those sort of things can improve, let’s say the environmental impact that Durham is having because the food waste has gone down, more women are breastfeeding for a longer period of time, there are a number of tangible outcomes like this that will be signals of success in our mind. But, we don’t want to have just an impact on Durham, we want to be evaluating everything we do and creating a template that can be replicated in other places.