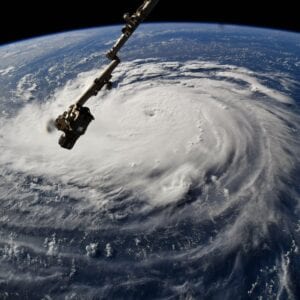 Leaders in towns and cities affected by Hurricane Florence are attempting to get operations running again. Soon they will likely be thinking about how their communities can do things differently so the next big weather event doesn’t cause as many problems.

Elizabeth Albright studies how communities recover after devastating natural disasters. For one research project, she followed seven Colorado communities for three years following deadly floods there. She joins Judith Kelley to talk about what she learned.

Albright is assistant professor of the practice of environmental science and policy methods at Duke’s Nicholas School of the Environment.

In the research we’ve conducted with collaborators at University of Colorado, we interviewed staff, town officials, and the public in seven communities. And what we found is people want their lives to get back to “normal” as soon as possible, while that may not be the most resilient solution moving forward.

And so there seems to be tension between more deliberative processes: analyzing past policies, looking for policy failures, involving the public, thinking about how things could be improved/strengthened/made more resilient [versus getting back to normal].

On how some communities respond to disaster

Whereas some [other] communities thought, “Hey maybe we should think about how we’re living on the land, what risks beyond floods should we think about. There are issues of affordable housing that floods only make worse, issues of healthcare, after a disaster, it’s known issues of domestic abuse increase.”

So [some policymakers think] about floods not only in terms of the amount of rainfall, and infrastructure, but cast more broadly in terms of risks across sectors of a community.

About the Colorado floods she studied

In September of 2013, in the front range of Colorado in some areas 20 inches of rain fell over a three-day period. Along with that, there were some dam breakages, and overland flooding. We studied three of the most affected counties and seven communities.This study was funded by the National Science Foundation.

We collected documents for three years after the flood, in each of the communities, all flood-related documents. We interviewed town mayors, town officials, staff related to flooding and conducted surveys both of town officials and the public.

Our main question undergirding much of the study, is: “Do communities learn from experiencing disasters?”

What did she find?

The level of damage across the seven communities varied, as well as the resources available to the communities. And so one town (what I would say is a fairly blue-collar, lower medium household income community) really struggled with the lack of resources in response to the flood, and had to rely much more heavily on the state – both in terms of resources and expertise to help them move forward.

Compare [that town] to Boulder, Colorado which is much more highly resourced, and have already been thinking about issues of resilience. In terms of their planning. So very different responses there.

What community changed the most?

The community of Lyons experienced the greatest damage … . And although the community members are highly resourced, highly educated, the town itself was devastated, and didn’t have a large staff before the floods.

But we actually saw the greatest level of learning there, where because they didn’t have a large number of staff on board, they brought in community members and developed seven task force of them, to basically re-plan their community.

Lyons is a fairly small community that was highly devastated. Lyons downtown was ruined.

After the event, they held public meetings, and more than 500 people attended. And then from that starting point they then developed these community task forces, which were a mix of community members and staff to really think about, “Where should the library go? What are the issues with affordable housing? What about healthcare? What about transportation?”

And they had task force for each of those sectors. “Where can we get grant money? How should we redevelop? How can we move to more renewable energy sources? ”

[Lyons] came up with a recovery plan, which very few the other communities did.

Are natural disasters opportunities for local leaders to step forward and show their skills, and be creative?

Ideally yes. And it’s a great opportunity for communities to reflect on past policies, land use plans, anything that may have failed — and the flooding event may reveal such failures.

What can policymakers affected by Hurricane Florence learn from this research?

So while I put up Lyons as an example of more in-depth learning with greater social learning policy learning, most of the communities that we met with demonstrated what I would call instrumental or incremental learning. (Learning about FEMA processes, learning about emergency response.)

But [many of the communities were] not really thinking about in depth [about] how we’re living on the land [or] value-focused ways to go forward.

So what I hope for the coastal plain and communities that experience flooding [in North Carolina] is to reflect on how they’ve developed to date. Where were their problems?

I hope that they engage community members in discussions. No one knows what flooded where and when and what the problems are, better than people that are living there. And so I think it’s critical to increase the number of voices being heard in the recovery process.

After Hurricane Joaquin hit in 2015, we went down to interview and survey flood survivors, and ask them about their experiences and their beliefs about climate change.

The one thing that jumped out at us in analyzing the data is, I had gone in with the hypothesis that if you experience an extreme event that you would be more concerned about climate change. And we actually didn’t find that result.

But if you were individually affected it didn’t seem to matter. And that was similar to findings in Colorado as well.