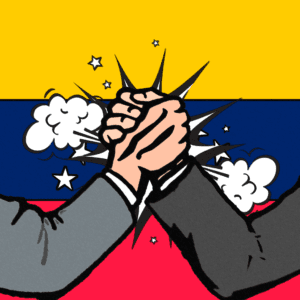 Venezuela is in the midst of a catastrophic economic crisis. According to Forbes, Venezuela’s yearly annual inflation reached 80,000% in 2018, up from 2,400% the year before.

The hyperinflation was so intense that officials revalued the currency at a rate of 100,000 to 1 – and even after that, the exchange rate with the US dollar is still nearly 3,300 to 1. People are spending hundreds of dollars on basic necessities and many still go hungry.

And now on top of this economic hardship, two men are both claiming to have the right to be President.

Patrick Duddy has plenty of experience with the divisiveness of Venezuelan politics, and with the concerns of the people.  He previously served as U.S. Ambassador to Venezuela and is currently the Director of Duke University’s Center for Latin American and Caribbean Studies.

Why should the average American care?

Well, the entire Western Hemisphere is increasingly integrated. This is something that I think is frequently missed in our larger discussion of our relationships around them, with Latin America and North America. Forty-two, forty-three percent of all U.S. manufacturing exports, for instance, go to the Western Hemisphere. We’ve invested decades of effort and billions and billions of dollars in trying to promote the consolidation of democracy and forge productive economic relations with the countries of the region, and we do this because we understand that it’s in our interest to have prosperous, democratic partners.

What we can see, is that the state of Venezuela, which is essentially flirting with failed state status, has begun to damage the economies and to cause friction with a whole series of other countries. This is clearly not in the interest of those countries, most of which, are in fact, partners with the United States through free-trade agreements or other associations and whose welfare and well-being can eventually affect our own.

What about inside Venezuela? Is there potential that this devolves into civil war? And, if so, who’s going to be fighting whom?

I think we’re in a very, very dangerous moment. Part of what makes it so dangerous is that the people who are overwhelmingly in favor of a change, and most of whom recognize Juan Guaidó as the legitimate president, are not armed. The government has a monopoly on force. The question is, is that monopoly monolithic? There are actually multiple groups which are armed and organized, so that you have, for instance, the conventional uniformed services (the Army, Navy, and Air Force), and as a separate element, you have the National Guard. And then, there are also these vigilante groups that are largely associated with the government and are based in some of the very, very poor neighborhoods, called Colectivos. And then, finally, in some of the rural areas, you have militias. The militias, they are organized and loosely trained, but I’ve noted in the past, that they do not hold or control their own weapons. If the Maduro government begins to distribute weapons to the militia, I think that will signal increased danger as those militias have been constituted to be loyal to the president, and they are largely outside the chain of command for the conventional military.

So, what people worry about is possible divisions within the various uniform services as it’s quite clear that, if things get out of hand, the government, such as it is, de facto government of Nicolás Maduro, might try to order uniformed services into the streets to repress demonstrators. If some units comply and others don’t, then the potential rises for conflict within the country.

What, in your view, is the best thing that the United States can do right now, from a policy perspective?

We need to continue to work with the countries of the region, we need to find ways to get humanitarian assistance to the Venezuelan people, and we need to do what we can, not only to see that the de facto government of Nicolás Maduro is deprived of the resources from the oil sales to countries outside of the region, but also to convince other countries in Europe and around the region to take similar measures.

Circumstances are very, very difficult on the ground. The U.S., until very recently, declined to impose sanctions on the oil sector, specifically because the U.S. didn’t want to make life any harder for the average Venezuelan than it already was. Things have become so much worse now, and to some degree, the oil sector has become so much more important, that if we wish to see democracy restored and human rights respected, the country’s political institutions rebuilt, we have had to take those steps.

But, I think it’s important that we not act unilaterally, that we understand that we have partners in this effort, in a group of countries called the Group of Lima, which represent most of the population of South America. We also have the support of the Secretary General of the OAS and we need to recognize the importance of that support.