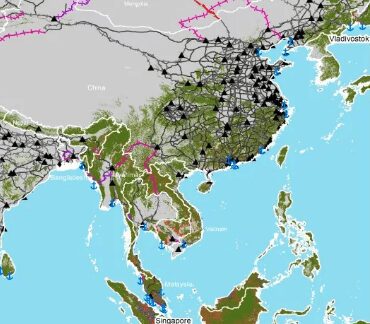 In 2013, Chinese President Xi Jinping announced the One Belt, One Road Initiative. The massive infrastructure project aims to link countries along the old Silk Road routes with Europe. China has spent close to $150 billion a year in the 68 countries that are taking part.

Such a large undertaking has immense implications for the environment. Duke University faculty member Alexander Pfaff has been detailing the potential environmental risks of the BRI and considering alternatives that would avoid environmental damage while still allowing for improved infrastructure.

What does the name “belt and road” mean?

I guess it means a lot of things to a lot of people. In short, it’s giant investments to connect China with the rest of the world both physically (with roads and ships), and also financially and politically. I think a general point is almost any two people tend to think of the BRI as something different. Most broadly from some while ago to some time in the future, it’s really large investments both physical and financial that will shape economic trade, and inevitably will affect the environment.

What environmental risks worry you?

Pretty much anything you can think of. If we go just within species alone, there are particular places where the species only exist in one place. We’re certainly concerned about deforestation in terms of carbon storage and global climate change potential. Water quality is a big deal. I guess one thing we also are trying to push is: don’t only think of the immediate damage [like] build road, spill oil on the ground … we also need to realize [that this scenario will happen:] build road, many people move to the city, other people move to places they never lived before. Think about the five year, 10 year reorganizations of whole economies and landscapes, those are probably way bigger impacts than those immediate damages, even though those could be consequential.

From a historical perspective, is what we’re seeing China do unprecedented in terms of laying out a big infrastructure plan on a global scale? If it’s a case that Europe or the United States invested in similar infrastructure projects, potentially during the Colonial period or other times, did they make the same mistakes at that time?

I think [considering the U.S. Colonial period is] the right, fair perspective … often you hear responses, for instance in Latin America, [recalling American Colonial history]: the U.S. had the Homestead Act, [homesteaders were asked to] please go out and cut everything down in order to gain property rights. There are so many stories of [people being asked to] improve the land in the name of whomever, could be the king, god. Yeah this has happened for a long time. I think two things. One: we should learn from what happened, and as we are many, many more people and much more dense, it is true that now we maybe should make different choices, but that doesn’t mean we should tell the poorest people on the planet they don’t get to progress, but rather it could mean we could give support so that the things that let them progress are done in an environmentally smarter way.