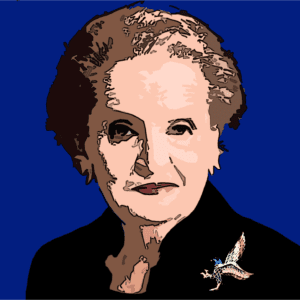 In this episode of the Policy 360 podcast, she joins Sanford School of Public Policy Dean Judith Kelley to discuss the rise of fascism around the world, concerns about President Trump and the fragility of democracy

“I’ve been saying two words that actually could appear contradictory,” Albright says. “One is that democracy is fragile, and the other that democracy is resilient. I think both are true, and you don’t just kind of have [democracy] by virtue of saying I want democracy. It does take work.”

Fascism is actually hard to define, because people throw the term around. Anybody you disagree with is a fascist. It’s not an ideology, it is a process. … And it is when a leader identifies himself with one group at the expense of another, so that the minority is really not only ignored, but often scapegoated about things.

It is– instead of trying to deal with the problems of society by finding some common answers, a fascist divides the society. So that is one of the definitions. The other is when the leader has absolutely no respect for laws and for institutional structures. When in fact, the press is viewed as the enemy of the people. It’s some behavioral aspects that are how a dictatorial leader actually takes power. It’s a process. Fascism is a process.

On the need to interact with people we disagree with.

I don’t like the word tolerance, because that’s kind of “tolerate,” [or] “put up with.” But [I think we need to] respect what they are thinking about, and try to find out why. This morning I was very tempted in the airport. These two women came up to me and one had their picture taken with me, and they had Trump buttons on. I thought, “Okay, we should have a discussion.” Then I thought, “It’s too early in the morning.” But I do think that what we need to do is find out what has motivated the people, and not just kind of put up with them.

Does democracy have a life cycle?

I don’t know if there’s any set cycle, but there clearly are moments where democracy is stronger and democracy is weaker. It’s interesting because I’ve been saying two words that actually could appear contradictory. One is that democracy is fragile, and the other that democracy is resilient. I think both are true, and you don’t just kind of have [democracy] by virtue of saying, “I want democracy.” It does take work.

I do think [people must] feel that they’re participating in the democracy. I happen to think that what’s going on now [politically in the U.S.] is the social contract is broken. That people … gave up individual rights, in order to be protected by a government. What’s happened is both sides are not fulfilling their responsibilities. I do think there’s a cycle, I don’t know whether its cycles — or up and downs — but it does require work.