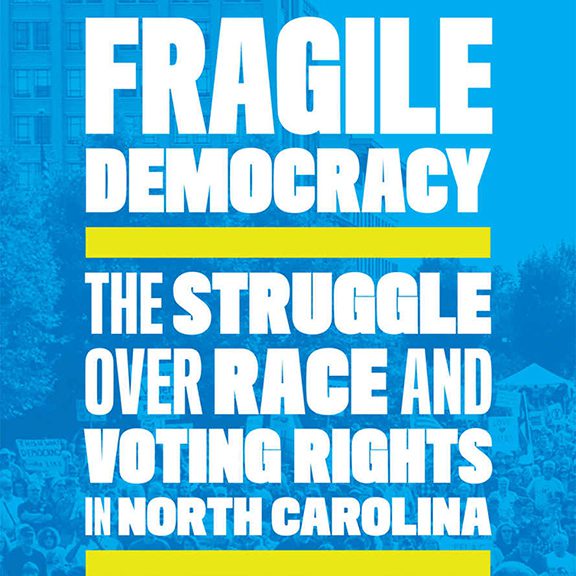 In the past few elections cycles North Carolina has been at the center of discussions around race-based voter suppression, most recently focused on stringent voter ID requirements. With election day only two months away, there is growing concern in the pivotal swing state of North Carolina about whether their voice will be heard.

James Leloudis, professor of history at UNC Chapel Hill, and Robert Korstad, professor of public policy at the Duke Sanford School of Public Policy, join Dean Judith Kelley to discuss the implications of voter suppression on the upcoming election and the complicated legacy of voting rights in the state. The two co-authored Fragile Democracy: The Struggle Over Race and Voting Rights in North Carolina. Listen:

The Trump Administration’s attacks on mail-in ballots coupled with recent policy changes rendering the US Postal Service less efficient bring concerns about voter suppression to the forefront of a national conversation.

Questions of racially targeted voter suppression were raised during primary elections this year. For example, the 2020 Georgia primary saw reduced polling locations, limited and often broken polling machines, and long lines in predominately Black and poor voting precincts. However, Bob Korstad notes that these issues may only be gaining national attention recently, they are far from novel obstacles.

“If you look at Georgia and North Carolina and other places in the United States, whether it’s purging the voter registration rolls, whether it’s different forms of gerrymandering going on, whether it’s having a limited number of places for people to register or places to vote, there’s very little that’s new in this whole process” he remarks. “I think that one of the reasons to study and understand this history is to get and appreciation for the way that manipulation of voting has a long history in North Carolina.”

Fragile Democracy attempts to do just that. The book begins with the Reconstruction Era, telling the story of the Fusion election law of 1895, a progressive set of election laws passed by a biracial coalition of North Carolinian lawmakers, including time off for voting registration and accommodations for illiterate voters and the reversal of these provisions by White Supremacist legislators in 1899, purging the registration and undoing much of the progress. Subsequent chapters chart the constant give and take of voting rights in North Carolina across the years, all the way up to recent elections and the heavily contested photo ID requirement under Senate Bill 824, which disproportionately impacts the ability of minorities to vote.

While the book is an intimate look at this struggle within North Carolina, Jim Leloudis emphasizes that it is far from a unique story. “This is not just a North Carolina story, it’s not just a Southern story, it’s an American story” says Leloudis. “This vision of a white America is one that Woodrow Wilson took with him to the White House when he forced segregation on the federal bureaucracy. It was a vision of the nation that D.W. Griffith celebrated, and the Klansmen, based on those Reconstruction Era novels by Thomas Dixon. It was a central part of a kind of national reconciliation around whiteness and the shared privileges of racial identity.”