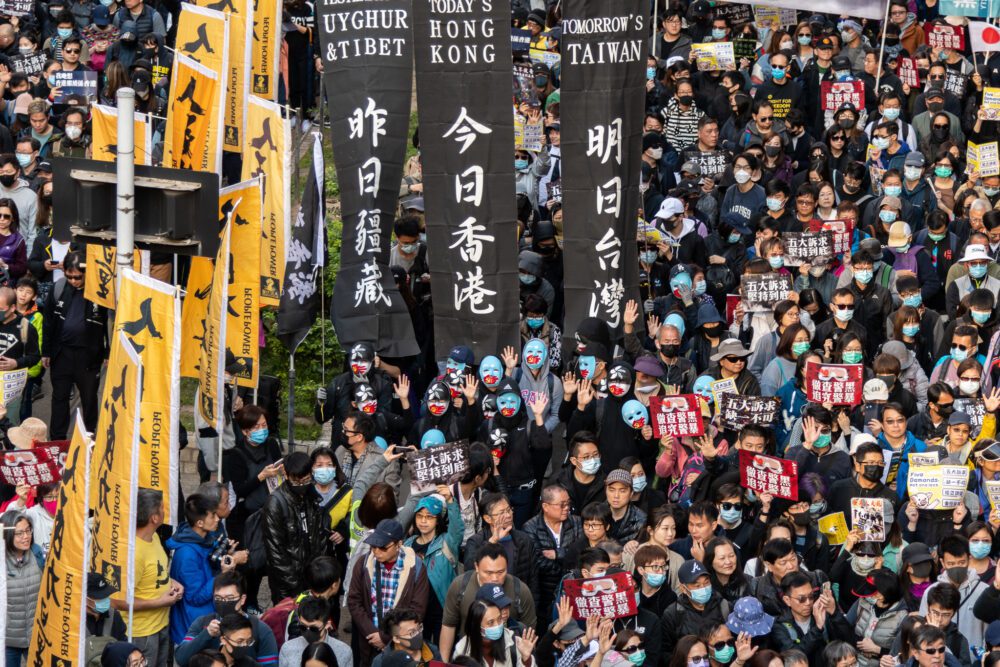 Feng now works as NPR’s Beijing correspondent and joins Dean Judith Kelly to discuss her path from Sanford graduate to award winning journalist, share stories from her work, and provide a unique insight on key issues she has reported on such as the Uighurs in Xinjiang, the protests in Hong Kong, and the coronavirus pandemic.

Emily Feng moved to China as soon as she graduated. “Weirdly I was super calm” she recalls. “I had all of my belongings in two suitcases and I just knew that this was the right choice for me at the moment.” Feng freelanced for about a year and a half before settling in as the Financial Times’s foreign correspondent. “It was, looking back, the right time for me to arrive,” she said. “It was just during the twilight months of a more open, post-2008 Beijing Olympics period and it was just as President Xi Jinping was starting to consolidate power and crack down on foreign media, on domestic media, on Chinese civil society.”

The area of investigation for which Feng has gained the most acclaim is her reporting on the oppression of the Uighur Muslims in China’s Xinjiang province. “One of the first trips I took across China when I moved here was to Xinjiang” she recalled. The time of her visit was just before the Chinese government implemented strict security measures in the region which would lead to large-scale detentions of Uighurs and other ethnic minorities in re-education camps. “I went back exactly one year later on a reporting trip for the Financial Times and in that one year period you could feel the difference” she continued “both in the tenseness in the atmosphere, people were much more nervous, and there were already fewer people on the street because the detentions had already begun.”

While in Xinjiang, Feng was the first reporter to uncover that China had been separating children from their parents and also uncovered details about the introduction of forced labor into the detention camps. Initially, she said that it was difficult to build relationships with some of the Uighurs due to intimidation from Chinese actions in the region and Feng’s identity as Han Chinese. She was ultimately able to form these bonds with Uighurs and other residents who trusted her as a member of the foreign press, “There’s still a strong belief among people living in China, that the foreign press can raise an issue up to the level of international scrutiny, or at least to the level of attention where a leader in Beijing will see their story and bring justice,” she said. “So there has been a willingness despite initial suspicion among Uighurs, among other ethnic minorities, to talk to me.”

Feng has also reported extensively is Hong Kong. Last October, she went to Hong Kong to cover the protests after having moved to NPR. “People in Hong Kong do not have a direct vote, they do not choose their representative,” Feng explained. “Protests are how they signal what their preferences are.” Thus, when their leaders did not listen, the once peaceful protestors felt no choice but to turn violent in order to force leaders to pay attention. “At the very end, and this was scary to watch, the slogan became ‘If I burn, you burn with me.’” Feng recalls the dichotomy of protests in the day in which hundreds marched peacefully, as opposed to the chaotic protests during the night with people dressed in black wearing gas masks and sometimes even body armor. More recently, she has reported on how National Security Law has been implemented in Hong Kong, making it so that rules and restrictions are essentially no different to Mainland China.

As the Chinese state attempts to control more narratives in the media, reporting has grown increasingly difficult for foreign correspondents in China. But for Emily Feng this is all she has known. “The year that I arrived was really when reporting, whether you were a Chinese journalist or a foreign journalist started to become more difficult,” she said. “I’ve only ever known Xi Jinping’s China.”