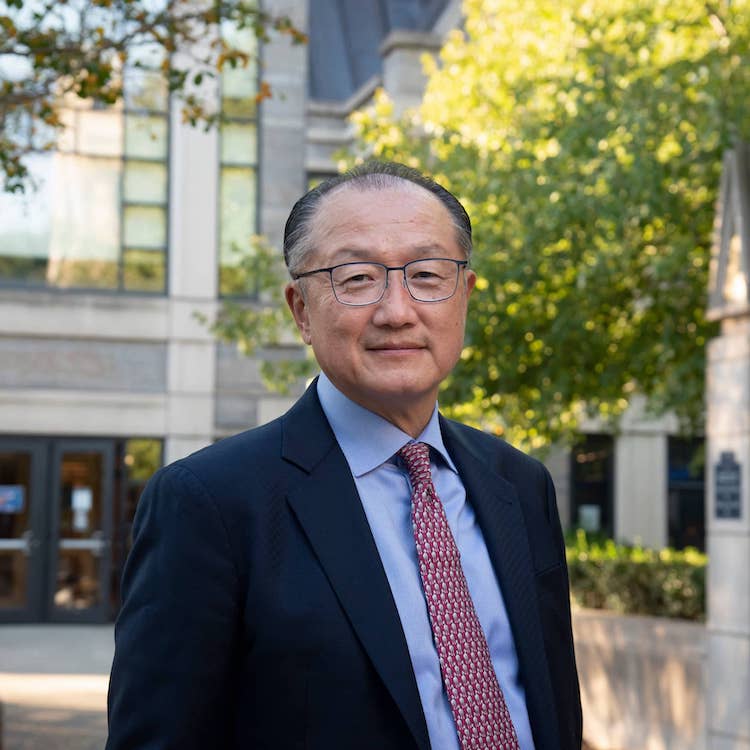 Dr. Jim Young Kim is a physician and anthropologist who previously served as the President of the World Bank. As a student at Harvard he co-founded the influential non-profit Partners in Health with Dr. Paul Farmer.

Kim has received the MacArthur “Genius” Fellowship and was named one of TIME magazine’s “100 Most Influential People in the World.”

Dr. Kim sat for a wide-ranging conversation with the Duke University Sanford School of Public Policy Dean Judith Kelley.  The two discuss China, the challenge and the need to vaccinate the world against COVID-19, and how anyone can use their own skills to make real change.

Part of the secret to making change, Kim says, is optimism. “Optimism is not the result of analysis. Optimism is a moral choice. When you’re going into a difficult situation, if you’re not optimistic, if you’re not constantly thinking, ‘There’s got to be a way to have an impact here’ [you won’t succeed].

Kim was on Duke’s campus to deliver the Rubenstein Distinguished Lecture.

On the importance of believing in children

On the importance of optimism when trying to make change

And so what I always say is, “Look, when you’re tackling something like poverty or healthcare in a really poor community, optimism is not the result of analysis, optimism is a moral choice. If you choose to be cynical, sarcastic, and pessimistic, you will probably achieve that outcome, right? So when you’re going into a difficult situation, if you’re not optimistic, if you’re not constantly thinking, ‘There’s got to be a way to have an impact here,’ — optimism is a moral choice.

And I’ve seen so many people who get into these situations and just get overwhelmed by their own cynicism. There was a book written by the great Tracy Kidder, mostly about Paul Farmer (our beloved Paul, Duke alum, right? Duke class of 1982.) Tracy said [to me], “When I see you and Paul and Ophelia and all the people who’ve made Partners In Health grow, I just wonder, how do you guys remain so upbeat and optimistic when you’re looking at such horrible things?”  He said, “I just have such a tendency to be cynical. But one thing I realized being around you guys is that cynicism is the last refuge of the coward.”

On finding a way forward with China

I think the most forward-looking and thoughtful leaders in the G20 are just simply — what’s the right word? Worried and anxious about all of the hard talk between the US and China and even the Europe and China. At the business level, the integration is so strong that we just have to figure out a political way forward.

The Chinese leaders were very kind to me, and I think it was just … My mother was a scholar of Chinese Confucianism. She’s studied Zhu Xi  … Zhu Xi is one of the most revered scholars in the history of China. My mother did her PhD dissertation on Zhu Xi. And when I told the Chinese authorities about that, they just went crazy. They took me to every place that Zhu Xi had been, where he lived, where he studied, where he planted a tree. … They revealed a lot to me and asked for my advice and help in doing things like fixing the healthcare system. And so I think I came away from that not being naive about the issues that exist between US and China, but a sense [with an understanding that] that this is not a nameless, faceless group of autocrats, right? These are real human beings who lived through some difficult experiences.

[Consider] Li Keqiang, the premiere. I suggested to him that he should gather together all the heads of the financial institutions, just like Chancellor Merkel did, and just have dinner with us.

And so the very first time we did that, he brought all of us together … and he said, “This is a really great time of year because this was the one time of year where my belly was full.” (I mean – this is the premiere of China.) [He said], “Except during the holiday seasons, we were hungry all the time.

So the premiere, one of the most powerful people in the world, personally remembered a time when his belly was full only once a year. We all kind of stepped back and said, “This is different. These guys remember what it was like being hungry.” (And certainly nobody else at that table could remember a time where we were actually hungry.)

So I tend to have a more hopeful view that we’ll find a way forward. In fact, there are enough of us who are bilingual and bicultural, and we’ve got to figure out a way to move forward in a more productive manner.

I mean, I think the criticisms that are brought from the West, I think they’re valid. And the West should make the criticisms that they’re going to make. But I also think that it’s so important for the entire world that we figure this out somehow. For someone who’s concerned about tackling poverty, if there were a rapprochement between China and Europe and the United States, and we figured out maybe on just one area, [for example] how to tackle poverty in Africa, [and] there was a kind of coming together around projects, or some kind of shared program, that would be so good.

…  China has made some of the largest commitments in terms of reducing its carbon footprint, but still needs to go further. And so how are you going to get there? There has to be some way of doing it along with Europe and the United States. And the sooner we find that path forward, the better.