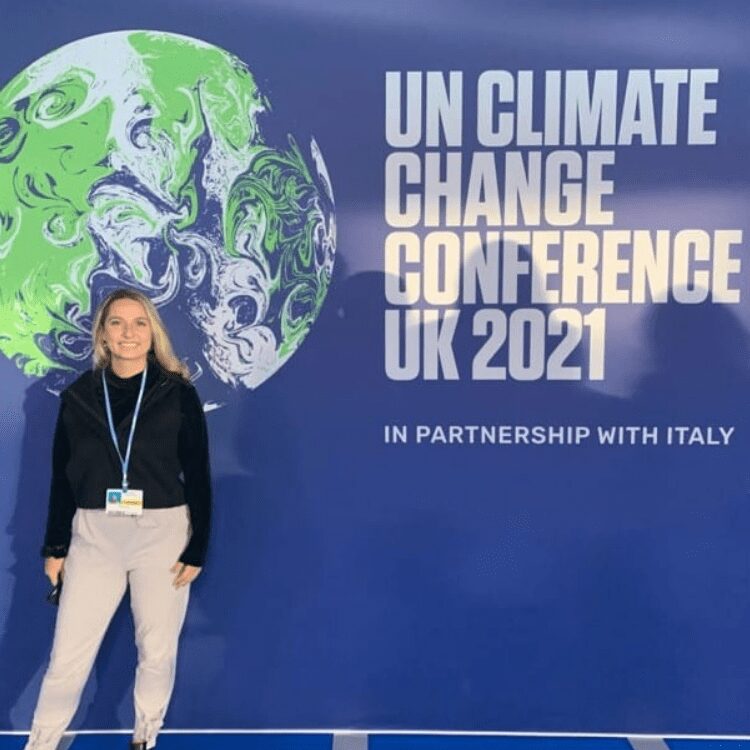 Twelve Duke students had an exciting opportunity recently – they attended the United Nations Climate Change Conference (COP26) in Glasgow, Scotland. In this episode, we will review that important conference through the eyes of students – what stood out to them, what worries them, and what gives them hope.

Before heading to Scotland, the students all took part in a practicum course to gain a better understanding of the issues at the heart of global climate change.

Emily Perry is a third year MBA and Master of Environmental Management candidate at the Nicholas School of the Environment, concentrating in Energy and Environment.

Sagar Shah is a senior at Duke majoring in Public Policy with a focus on clean energy policy.

Gabriela Nagle Alverio is a dual J.D. & Ph.D. student in the University Program in Environmental Policy at Duke’s Nicholas School of the Environment and the Sanford School of Public Policy . She was the teaching assistant for the practicum course.

Sagar Shah: I think that when I talk to people back here at Duke who are asking how it was, it’s really easy to be pessimistic about what the media coverage of world leaders is or what climate pledges are made, but the people there, around the world, I know now that in every community of this planet there are people who care immensely about climate change and they’re going to keep fighting until there’s no longer physically possible.

Emily Perry: I was in awe of the entire thing. Just being among 20 to 30,000 other people that have similar goals and wishes for the planet that you all share was just breathtaking, honestly. And when I returned, I spoke to my friend and we were joking that in an atmosphere like COP26, you wonder how not everyone on the planet is focusing on this issue all at the same time. It put a bit of a fire under us in a good way.

Gabriela Nagle Alverio: [One] thing that gave me hope was the amount of activism that we saw. Think about any other UN convention or conference. How many people attend? How many people even hear about it? And COP26, everyone was talking about it. Everyone knows what it is. That is so inspiring to me and gives me hope that people really care, and that we are going to do something about this, and the pressure is not going to let up.

On what was accomplished

Gabriela Nagle Alverio: I do think we accomplished some really important things. Many people have heard of the Paris Agreement. It was such a big inspiration, and it was the most ambitious climate change agreement that we’ve ever had. But one of the main things that came out of this COP, was actually figuring out the logistics on how we operationalized Paris.

So if we think Paris was so great, then COP26 was [also] great, because now we’re actually going to take those things and figure out how to put them into practice. And I don’t think that’s the sexiest topic and it’s not really covered by the media as much, but in our class, it’s one of the issues that we were looking out for.

And seeing that it played out in some of the ways that we were hoping for did give me hope. I think that there is validity in the process, and we still have to keep pushing for more progress.

Emily Perry: [In one session] I was able to listen to extracts from poems created by scientists and health professionals [with names like]  “How to Pierce a Heart.”  Short bits of what these real practitioners in the field felt about the Earth and nature and their place in it.

[The goal was to] “cut through the doom and despair.” And so, I was sitting there, and I was moved to tears, and I felt a little bit self-conscious about that. It just was extremely beautiful to hear what the arts and what creativity could inspire in people.

And so, I came away inspired in a different way, separate from the law and the policy and the negotiations, and all of the action in the private sector as well. That was really important to me.