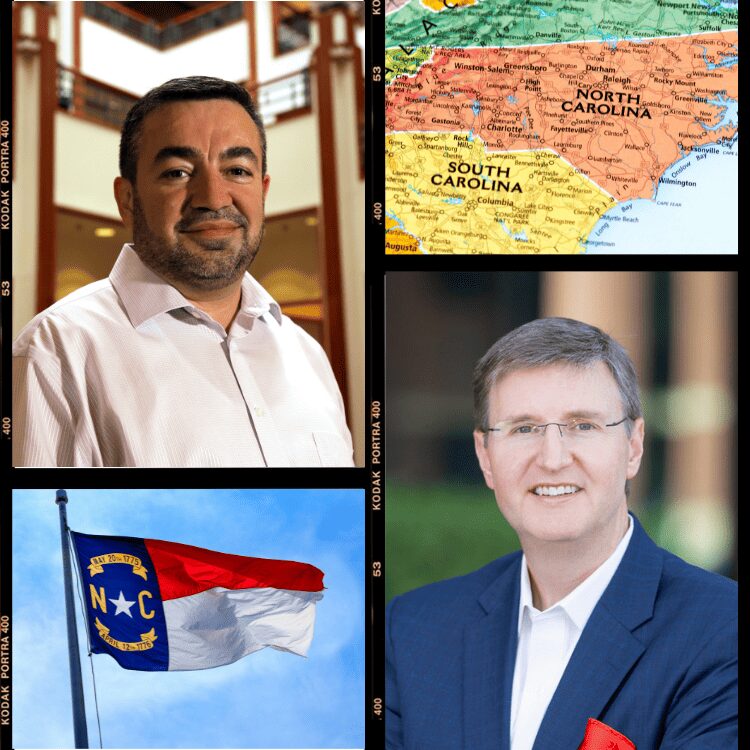 Ep. 138 Effective Ways to Connect Across the Political Aisle

Ray Starling grew up on a hog and tobacco farm in rural North Carolina. He recalls working on the property by age five. Abdullah Antepli grew up in poverty in a slum in Turkey – his father left school in the fifth grade, and his mother is illiterate. Today, both men live in North Carolina, and their politics could not be more different. Starling leans right – he is a former principal agriculture advisor to former President Trump. Antepli, a Duke professor and a Muslim leader, leans left.

But the two became friendly through an innovative program designed to get civic, business and political leaders with differing political views  to discuss important issues in the state of North Carolina. In this episode, they talk about how the strategies they learned in the program could help others in these divided times.

On the differences in the two men’s life experiences

Starling: I would’ve had my first job by the time I was five. I grew up on my family’s hog and tobacco farm in Sampson County. And so part of my job — it was not a very big job, but it was important because if you didn’t do it correctly, other things would back up. Tobacco is typically cured inside the barn in racks.

And my job was to get the racks off the table [once the tobacco was removed, and] take those racks around to the side of the barn and store them in a way that they didn’t fall over. And so I will tell you that if you had asked me to describe my resume, I’d be happy to tell you about all kinds of cool things I’ve done, but nothing had a greater impact on forming my understanding, my positions, my respect, frankly, for the working world than growing up on a family farm down in Southeast North Carolina.

Antepli: Five-year-old Abdullah was in a slum, in a Southeastern part of Turkey, in an incredibly poor family of seven. His mother never went to school, she’s still illiterate. His father only had up to a fifth grade education. His surrounding was in a cycle of failure, disappointment, poverty and violence, and wondering, “Am I going to be part of this perpetual failing and misery? Is there any way I can get out of this cycle?” And it is really an incredible story that I am a professor at Duke University living in Durham, North Carolina right now. Because back then that five year old could have never imagined anything close to the life that I’m living right now.

On how people can start to appreciate each other’s differences

Antepli: When you try to match your values with your concerns, when you map it out, it’s very clear that actually people that you oppose or you disagree with, they are not moral-less (they don’t have a very distinctly different set of moral values), it’s just they’ve ranked their values differently. What is your number one, number two? What is your greatest moral voltage on any given issue may only be number nine and number 10 on the other side. That really creates an incredibly helpful paradigm shift, meaning people come from somewhat the same set of values, but because of their life experiences, because of what they do, because of the frame of reference that shaped their moral philosophies, either religion or secular, they rank these values differently. This is one thing I got with this program and I truly cherish it.

Starling: I remember distinctly. [The North Carolina Leadership Forum meeting was on Zoom, and I was watching a] conversation that in my view really got out of hand just in terms of at least one or two individuals — they were on the other side of the issue than I mentally was. And they were just socking it to us. I mean, they were saying things like there was no other way to see this issue, we must be insane if we did not see it the way they saw it. And in fact, it actually made me want to disengage. I actually wanted to pull back because part of me is like, “I only have so much energy. I only have so much desire to engage here. This is a mock exercise, I’m not going to actually get my blood pressure up.”

But then I was literally called into that conversation and asked to share some competing views, as were other folks. And what I saw happen was that over time, the folks that had been really vocal — almost combative — the folks on their side of the issue actually seemed to come our way. And I realized that folks who are interested in solving the problem and who may be a little closer to being willing to find the middle, they need folks on the other side to draw that out. To bring that conversation out and to give them something to agree with, almost in a way, so that they can shun the loudest voices on the side of the issue that they’re on.

I’ll just never forget that because largely I wanted to just wave it off. I was like, “This is ridiculous, I don’t have to take this, I’m going to just sort of tune out for a moment.” But then I got drawn back into the conversation and I realized that a part of that was getting folks on the other side, back to the table to a more reasonable conversation, kind of bringing things back to the middle. So I won’t forget that. I would’ve never thought that my voice was important that way had I not seen it in a little bit of this exercise that we do.