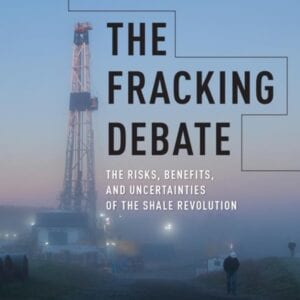 In recent years, oil and gas production in the U.S. has increased dramatically, in part because of new technology. High volume hydraulic fracturing or “fracking” is one of these new processes. “Fracking” is hotly debated. Proponents say it has caused an economic boom for many communities and is helping the country be energy independent. Opponents cite environmental concerns.

Daniel Raimi set out to look at the evidence for these and other questions. As a part of his research he traveled to every major U.S. oil and gas- producing region. His book is called The Fracking Debate.

On the history of fracking

The idea of stimulating an oil and gas well goes back to the 1850s, to the very beginning of the oil industry in Pennsylvania where people would walk around with wheelbarrows full of nitroglycerin based explosives and sell them to oil well operators so that they could lower the explosive to the bottom of their well, detonate it, and increase the amount of oil that that well produced. That’s the very earliest type of well stimulation.

The thing that’s really new about fracking in today’s iteration is that it’s applied at large volume …  [Shale] rocks hold a lot of oil and gas, but for decades the oil and gas industry has not been able to access that oil and gas in an economical way.

This high volume hydraulic fracturing, coupled with other technologies … that’s enabled enormous growth in the United States natural gas and oil production, so that today the US is producing far more natural gas than it ever has, and it’s producing near its peak of oil, almost 10 million barrels a day today in late January.

On the diversity of fracking operations in the U.S.

I had seen documentary films, I had read news reports that described the impact of the oil and gas industry as being really enormous and really stark. When I traveled to Pennsylvania for the first time I almost expected to see something out of [a dystopian film]. What I found in Pennsylvania was nothing like that.

In other parts of the country though, say in west Texas, or in parts of Wyoming, or western Colorado, the signs of the industry are everywhere and they’re impossible to miss. If you’re driving anywhere in a two hour radius of Midland, Texas you’re going to see drilling rigs, you’re going to see pump jacks, and all kinds of equipment that are the telltale signs of the oil and gas industry.

Oil and gas production looks different and feels different in different parts of the country. Oil and gas production in southwestern Pennsylvania has an important impact, but because the region is relatively diverse economically, and because it’s relatively densely populated, you don’t feel the same presence of the industry as you do when you go to west Texas where it’s a very rural region and the oil and gas industry is really the bedrock of the regional economy.

Remember fracking isn’t the same thing as drilling a well. If you drill a well and you have problems with the steel and the cement that are supposed to encase the well, then methane can travel from inside the well outside into drinking water sources.

The flaming faucet scene in [the movie] Gasland was actually filmed in Colorado [not] Pennsylvania.

… The specific flaming faucet in Gasland, that is a matter of debate. The Colorado Department of Environment reviewed that case and determined that the methane in that individual home’s drinking water was actually not caused by oil and gas drilling. It was actually caused by the way that the water well was drilled. (The water well itself was drilled into a pocket of naturally occurring methane.)

In the large majority of cases hydraulic fracturing really does not take place anywhere near drinking water sources, and the likelihood of chemicals or other contaminates moving from deep below where fracking takes place, up to those water tables is extremely small, near zero.

There’s really only one case and it was in a place in Wyoming that is also featured in [the movie] Gasland where there’s pretty reasonable evidence that hydraulic fracturing itself affected the water source.

This particular case in Wyoming is unusual because fracking occurred at roughly 1,200 feet as opposed to other wells which are typically fractured at much deeper depths.

On the surprising health benefit of fracking

Natural gas production has gone way up in the United States. That’s pushed natural gas prices way down, and because natural gas is used to generate electricity, that low cost of natural gas has allowed it to take market share away from coal-fired power plants.

Coal-fired power plants emit a number of pollutants, including so called criteria pollutants, mercury, other air pollutants that contribute to tens of thousands of premature deaths each year. Natural gasses’ displacement of coal fired power has helped reduce those harmful air pollutants.

What about the uptick in earthquakes in some fracking regions?

In Oklahoma, in 2015 there were more than 900 earthquakes of magnitude 3.0 or greater. Damage typically occurs only if the magnitude is 5.0 or greater, so most of these earthquakes didn’t cause damage but they certainly unsettled people.

There have been three earthquakes in Oklahoma that have been above that level of 5.0 and they have caused damage to property.

This problem of earthquakes has been caused actually not by fracking itself, but by the disposal of wastewater that’s produced from all oil and gas wells. Every oil and gas well, regardless of whether or not it’s fracked, produces some water. In some cases wells will produce 20 or 50 barrels of water for every barrel of oil that they produce. The more oil and gas production you have, the more of this wastewater you have to dispose of.

The leading way that companies dispose of this wastewater, in Oklahoma at least, is by pumping it underground into injection wells or disposal wells. These are regulated by the EPA, they’ve been around for a long time, and they’re designed to prevent contaminated water from moving up. They’re designed to prevent that contaminated water from reaching drinking aquifers and creating problems with those sources. However, they haven’t been designed historically to prevent water from going elsewhere.

…In Oklahoma is  an enormous volume of water was being injected into one particular rock formation called the Arbuckle, and the Arbuckle basically got water logged. Some of the water moved out of the Arbuckle, moved downward into basement rocks and interacted with naturally occurring faults. That newly introduced water altered the underground pressures in the basement rock and led to this surge in earthquakes.

… but the actual energy that’s been released by these earthquakes, their potential to do damage, is still far, far below the risk in places like California. For example, in 2014 there were far fewer earthquakes in California than there were in Oklahoma, but they’ve released 200 times as much seismic energy as the Oklahoma quakes did.

This earthquake problem in Oklahoma it’s certainly a problem, and there’s still more that needs to be done to reduce the quakes, but the likelihood of catastrophic quakes that we think about when we think about maybe Japan or California, that seems quite unlikely.

How does fracking connect to climate change?

The effects on climate change are complicated and fascinating. The basic story is that in the last 10 years and probably over the next 10, 15, 20 years hydraulic fracturing, because of the increased production of natural gas that it’s enabled, has dramatically reduced US greenhouse gas emissions. Today in the United States total carbon dioxide emissions are roughly around their 1990 levels, and down over 15% from their peak in the first decade of the 2000s.

… in the short-term, natural gas looks like a pretty clear win for the climate. Things, again, take a complicated turn when you start thinking over longer time scales. Over those longer time scales hydraulic fracturing, because it’s lowered the cost of natural gas and it’s lowered the cost of oil substantially, that encourages people to use more of those fuels. That leads to higher greenhouse gas emissions. Over time, what studies show is that in the absence of greenhouse gas policy, the shale revolution probably doesn’t help that much and probably doesn’t hurt that much in the long term in the fight against climate change.

Fundamentally, with or without the shale revolution the United States and the world needs robust climate change policy to get a handle on this problem.

There are two that come to mind, two big ones right off the top of my head.

Climate change is an enormous challenge for the United States and for the world as a whole. I think that the shale revolution actually provides an opportunity to implement climate policy at lower cost than we otherwise could, and I hope we’re able to take advantage of that opportunity.

The second recommendation, it’s less of a policy recommendation and it’s more of a political recommendation. A lot of people see …  the fracking issue, as really black and white as you’re either pro-fracking or you’re anti-fracking. I don’t think that’s particularly helpful.