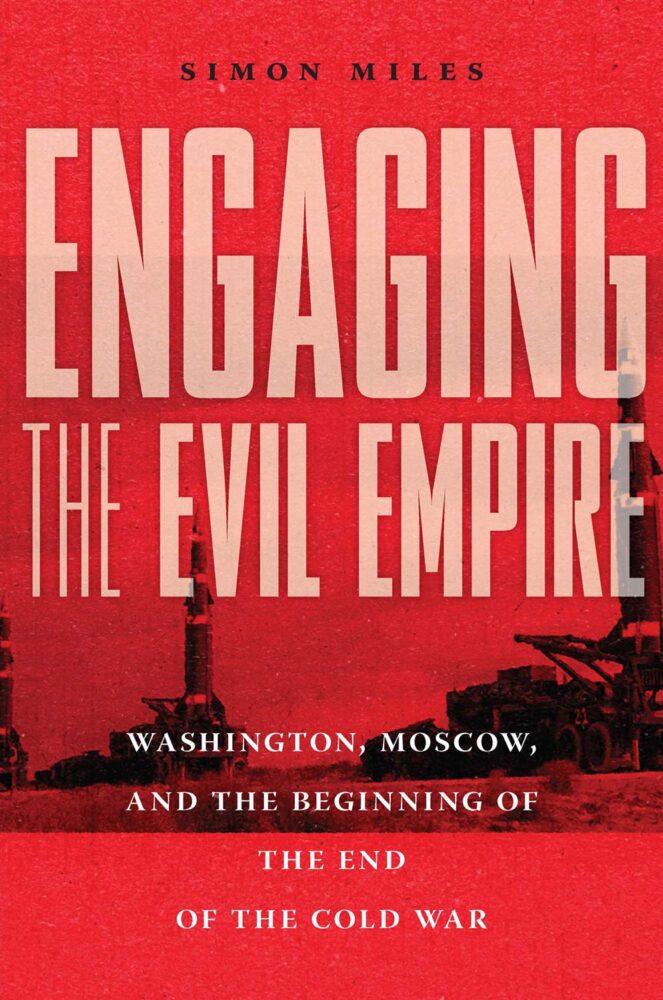 The end of the Cold War is often considered a bit of a geopolitical anomaly. In 1980 the increasing antagonistic relations between the U.S. and the Soviet Union caused many to fear that the conflict was once again on the path to nuclear fallout. President Regan famously characterized the Soviet Union as the “evil empire” and while Soviet media described U.S. foreign policy as “nuclear insanity.”

Then suddenly, things quickly shifted. The two superpowers started cooperating and even more surprisingly the Soviet Union collapsed by the end of the decade and just like that the Cold War ended. As historian John Lewis Gaddis has observed “Wars, hot or cold, do not normally end with the abrupt but peaceful collapse of a major antagonist.” So what changed in those 5 years that brought about the end of the Cold War?

Simon Miles is an Assistant Professor in the Sanford School of Public Policy, and his recently released book Engaging the Evil Empire: Washington, Moscow, and the Beginning of the End of the Cold War seeks to answer this question among several others. The book focuses on the often overlooked period of the early 1980s. Was this shift in relations as abrupt as it appeared? To what extent did popular perception of the conflict reflect the reality of the situation?

A major theme throughout the conversation and Miles’ book is perception of the Cold War versus the reality behind the scenes. Miles identifies in the introduction to his book, “So much of the story of the Cold War is one of perception, reality, and the often varying and vast differences between the two.” Miles reflects early in the discussion that one of the major changes in the first half of the 1980s is the shift in perception of the Soviet Union as having the advantage in the conflict to the U.S. having the advantage. The bounce back of the U.S. economy, a technological advantage on the side of the U.S., overstretched Soviet military spending and dissent within the Warsaw Pact were among some of the factors which tipped the balance in favor of the U.S.

A unique aspect of Miles’ book is its extensive work from foreign archives, whose lower levels of document classification allow for unique insight into conversations between Soviet and American leaders behind the scenes. “Countries which are now post-Communist states have made openness, transparency about the their communist pasts a big part of their reckoning with them,” said Miles “No one can hold a candle to a country like German or the Czech Republic where absolutely nothing, with the exception of a few very personal sensitive issues, is classified.”

He recalls a story of one of his breakout realizations from his time researching in the East German Communist Party Archives and coming across a series of recorded conversations between Arthur Burns, the U.S. Ambassador to West Germany, and two Soviet ambassadors to East Germany.

“At first I think that these are going to be very banal because the two would actually regularly meet” recalled Miles, “and then Arthur Burns starts talking and he says Ronald Reagan has sent me here to Berlin to use this as a back channel to keep Cold War tensions under control for top level communications between key policy makers in Washington and Moscow, and ultimately to think of ways to reduce the tensions between us.” This revelation became essential to Miles’ argument that the early 1980s were not as close to the brink of conflict as was perceived.

“I use perception as a way to really show the value of history, specifically history, to studying phenomena like this,” continues Miles. “because it’s through the documents that we can really get at how people perhaps lied to themselves, perhaps were lied to by their subordinates, or perhaps confounded reality with their own prejudices and conceptions. And that’s the story of the Cold War to me […] ”